Geraniums are one of my favorite houseplants.

Serious gardeners look at me askance: “But they are so easy to grow!” Exactly. Besides, in the summer I can set them outside to dress up the porch. In addition, there are the wild geranium cultivars that seem just as easy to grow and propagate.

The epitome of geraniums is the zonal geranium, not actually in the Geranium genus, but in Pelargonium, native to South Africa. The Dutch brought them to Europe in the early 1700s.

I like the big red flowerheads, about 5 inches across, made of many florets. They also come in white, pink and various combinations. The leaves are roundish and fuzzy with scalloped edges. The cottage with the white picket fence always has them in the window boxes or inside in the windows. There’s also the ivy-leafed type.

I double-checked what I’ve learned in 27 years of growing geraniums with information from the Old Farmer’s Almanac, www.almanac.com, and we agree: geraniums appreciate bright light. Otherwise, they still bloom but they get leggy. When that happens, I cut off the thickest stems, use a pencil to poke a hole in the soil in the same pot or a new pot and insert the stem. It’s that easy to root a cutting.   If soil is not immediately available, the stems can be put in water.

Back when I walked my kids to and from school, I’d stop to chat with a neighbor, Charlie Culp. One fall day, he handed me two plastic grocery sacks, each with a hot pink geranium he had uprooted from pots on his front steps. Frost was predicted and he told me I should winter them.

I potted up both and shared one with one of the teachers. All winter I enjoyed mine. In spring I took it back outside. Some years I planted it in the garden, sometimes I left it in the pot. Sometimes I took cuttings to bring in instead of the whole plant, especially if the plant got too big. Eventually I ended up with half a dozen plants. This went on for 17 years.

The last year, I took cuttings, put them in water, couldn’t find time to plant them and when I finally looked closely at them a couple months later, they were covered in aphids and never recovered. But soon a friend shared a beautiful red geranium and I collected shades of pink at the nursery.

For the last 10 years, I’ve hauled in four big pots of geraniums for the winter and put them in the big, southwest-facing window in our attached garage. It’s well-insulated, including the doors, but the wall between the house and the garage is less so.

Watching the thermometer in the garage, there are only a couple weeks when it gets below freezing at night and we must bring in the plants. And yes, we drive our vehicles in and out of the garage a couple times a day. But the door is never open more than a minute or two and the temperature barely changes.

A couple of tips: when you bring in geraniums for the winter, try to make yourself cut back the blooming stems to 6-8 inches tall so the plant won’t be so spindly by spring. You can pot up those cuttings in potting soil (not garden soil).

Don’t over-water, especially if you have the plants in their preferred cool location (50-60 degrees). Let the top inch of soil dry out. Fertilize sparingly, waiting until the days lengthen after the winter solstice. And don’t forget to keep turning the plants so they won’t grow one-sided.

Cuttings from true geraniums and their cultivars developed for the garden can also be propagated from cuttings. Photo by Barb Gorges.

Real geraniums are in the genus “Geranium,” wild geranium. There are several species native to North America. Many of these wild species are also known as “cranesbill” because the seed pod is a long, beak-like shape.

Area nurseries are selling several Geranium cultivars that will do well here. They have a roundish but palmate (having “fingers”) sort of hairy leaf and a pinkish flower that is equivalent in size to the Pelargonium’s individual florets.

My wild geranium makes a great ground cover in shadier areas. The leaves turn red in the fall and persist all winter. When mine started crowding out other plants in the raised bed, I decided to snip a few leafy stems and see if they would root in water so I could then fill in bare spots elsewhere. And it worked! 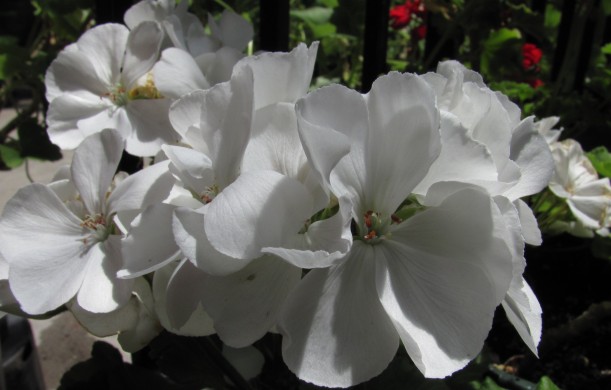